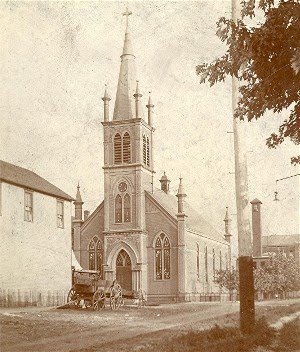 Christ Lutheran Church and School have brought Christ to the people and the people to Christ for more than 100 years through the Grace of God and the power of the Gospel message. Over the past century, this church has maintained its belief in the inerrancy of the Holy Bible, and in the assurance of salvation through Christ’s death for our sins and His glorious resurrection.

In the 1880’s, the need arose to minister to the spiritual needs of German-Americans who resided on the south side of Peoria. Trinity Lutheran congregation created a mission station there, and later Christ congregation petitioned for their release from Trinity. Their release was given, and Christ Evangelical German Lutheran Church was chartered on December 9, 1894. The Rev. F. W. Jass was the first pastor. During his tenure, the membership grew, a choir was formed, a Sunday School was established, and some organizations were started. Pastor Jass resigned because of poor health in August, 1917, and he died a month later.

The first church and school were a single wooden structure at the corner of Malone and Chandler streets. That edifice was destroyed by fire caused by lightning just eight months after the congregation was organized. The second church building and a separate school were planned within a week, and were built immediately.

Following four years of service from the Rev. William Grother, Dr. J. C. Schuelke began his 19 year ministry at Christ Lutheran. He led the congregation in true Lutheran doctrine, in Christian discipline, and in a program of activities which made the church the focal point of family living for the members. A new school was built, the church was enlarged and bricked, and a new organ was installed. Membership continued to grow, and members were encouraged to participate and share their talents. Vicars first came to the congregation when Dr. Schuelke was the President of the Central Illinois District of the Lutheran Church – Missouri Synod.

The Rev. Raymond Eissfeldt and the Rev. Donald Wolkenhauer next served as the pastoral team until 1958. The current school building, across Starr Street, was built during their term at Christ Lutheran. 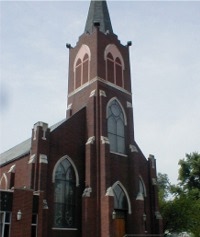 Then came the Pastors Schliepsiek – K. Richard as Pastor and John as Pastor Emeritus. The Rev. John Strohschien joined them in 1968 as Assistant Pastor, and served four years. During this ministry, women were first invited to congregational meetings, and they were given the vote and the opportunity to hold some offices.

When the conflict came to the Lutheran Church-Missouri Synod in the early 1970’s, Christ congregation confirmed its stand on the inerrancy of the Scriptures, and opted to reaffirm its membership in the Missouri Synod. The congregation continues to strongly support the Synod in both spiritual and financial matters.

When both Pastors Schliepsiek retired in 1975, the Rev. Arthur Schudde accepted the call to Christ Lutheran. He remains a strong spiritual leader today. He has emphasized a Christ-centered, life-directed focus. He was joined for two years by the Rev. John Schmidtke, whose special interest was the multi cultural and neighborhood ministries. In 1990, the Rev. Roger Disbro joined the pastoral team as Associate Pastor and directed the evangelism and outreach programs. When he accepted a call in the fall of 1999, the Rev. Louis Knief, emeritus, became the Assistant to the Pastor.

When Pastor Schudde retired in 2004, Pastor Knief served as interim pastor until Pastor Karl Eckhoff accepted the call to serve as senior pastor in August of 2005 and served along side of Rev. Aaron Schellhas who accepted the call of associate pastor upon Rev. Knief’s retirement in July of 2008. Pastor Schelhas subsequently took a call to Woodstock, IL in 2013.

Music has played a significant role at Christ Lutheran. The congregation is a singing church. It has been blessed with talented organists who give willingly of their time and talents. The choir, which was organized early in our history, continues to enhance the worship and special festival services. More recently, handbells and instrumental ensembles have been added to the music ministry.

Programs abound for all age groups from Cradle Roll to Senior Citizens, and for a diversity of interests. Bible Study is stressed In Sunday School and Bible Classes, as well as in organizational activities. Youth and ladies’ associations were established in the first years of the churches’ history, and they remain strong today.
Fellowship and fun are provided in a Christian environment.

Christ Lutheran remains a flagship congregation in the Lutheran Church-Missouri Synod, a spiritual beacon on the South Side of Peoria, and a church home for many families.